Possibly millions of customer records (name, address, e-mail and phone number) from PostNord was exposed through unused API fields in a parcel tracking page used in Norway. The API has been online at least since 2013. The security issue was discovered after a parcel delivery from Komplett.no (Komplett Group AS, Norway) and the issue was also reported and handled through Komplett.no. 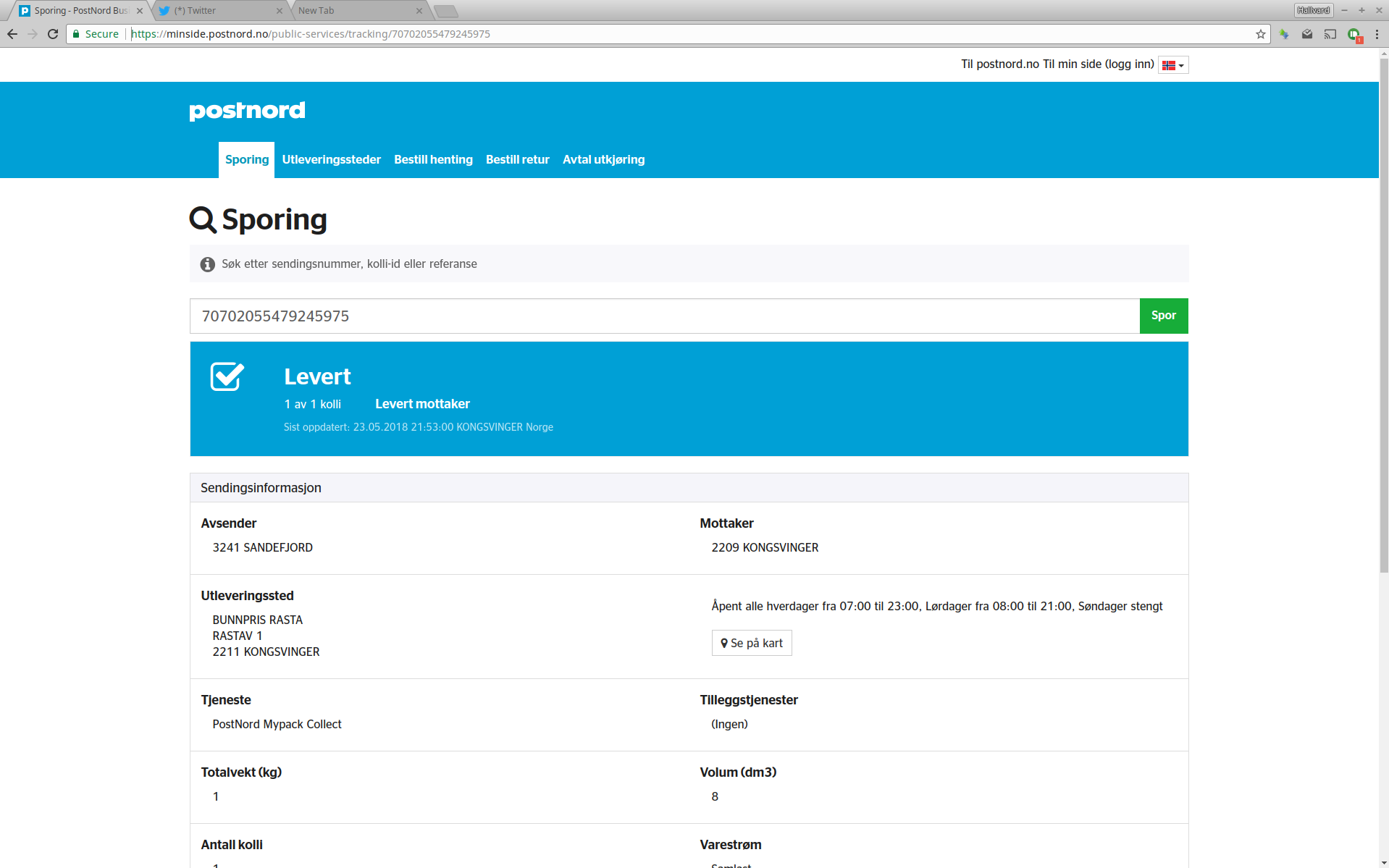 I had just bought a new phone from Komplett.no. The phone was sent with PostNord to my local store. When Komplett.no sent the package, I was e-mailed a link to a page with tracking information (minside.postnord.no, "min side" = "my page"). When it arrived at the local store, I was sent an SMS from PostNord with the pickup code and the same link to the tracking page.

The tracking page contained more information in the backend call to get parcel and tracking information than what was displayed on the page.

PostNord delivers, among other postal and shipping services, parcels in the Nordics. Norway was affected. It is possible that the parcel service in Sweden, Denmark, Finland and Germany also was affected. Norwegian tracking number can be checked on other PostNord tracking pages (e.g. international and Swedish page) so I find it likely but unconfirmed.

According to privacy policy of Komplett.no the client data is stored up to 36 months in PostNord's databases.

Komplett.no is part of The Komplett Group and is the largest e-commerce player in the Nordic countries. Head quarters in Sandefjord, Norway. Reporting revenue was MNOK 8,100 in 2017. 1,600,000 active customers with one or more orders the last year. Numbers according to Canica (owner). They pick and send packages 24/7 with a average of 3 per second i 2017. Should be around 95,000,000 (95 mill) packages per year. Komplett.no sends package with Posten Norge (state-owner company, owned by Norway) and the Norwegian parcel service of PostNord AB (state-owned company, owned Sweden and Denmark).

Small curiosity: No more information than Komplett.no have declared in their privacy policy (Norwegian text) was exposed. I am confident that the privacy policy is telling the truth in the chapter about sharing information with PostNord. Thumbs up! 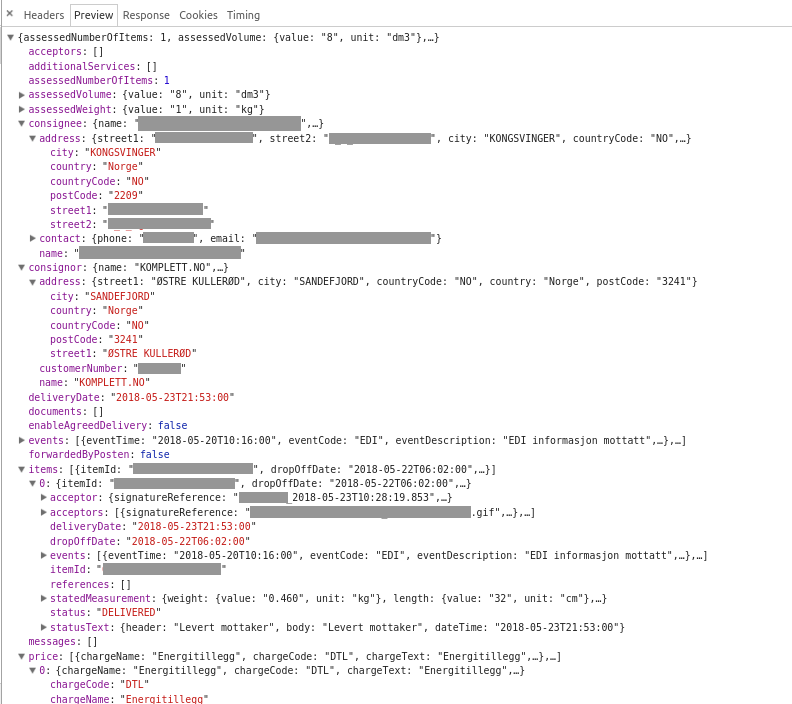 The page had a URL like https://minside.postnord.no/public-services/tracking/7070205547XXXXXXX (where X was all digits in the tracking code). The tracking codes are GSIN tracking numbers. They have a prefix and a checksum as last digit. They are not far from auto increment. See update below for details. The tracking number is displayed on labels that are printed and put on the packages. They are also sent to the client by the shipping company or the e-commerce company.

The GUI on the tracking page contained information like city of origin, city of destination, opening hours of pick up point, weight, tracking information. It does not show name og the full address of origin or destination.

Inspecting this page in Chrome Developer Tools I found that the REST response contained more information than in GUI. In addition to more detailed information about the package, it contained name, full address, phone number and e-mail for the recipient. It also contained the name and address of origin.

I looked at 3 IDs around the tracking ID I got from my Komplett.no package. They where all Komplett.no packages containing 6 identifiable names (e-mail/phone contained one name and name on package was a different one). On my phone I had an SMS for a package from the company Forbruksimport.no AS back in 2016. The link was still active and my full name, address, company e-mail and phone number was present in REST service. Changing tracking codes around this number I found another package from two other parties (a school and a printing company). This confirmed that both old tracking codes was active and that other PostNord customers was affected (not Komplett.no). I did not confirm any foreign tracking numbers (don't have any).

All checking of tracking numbers was done manually in the GUI in Chrome. Unless PostNord had mass download protection, I think scripting a download of the whole database would be trivial.

26th of May - Update regarding tracking number (Thanks, Jonas!):

The tracking numbers are G1 numbers and are detected as Global Shipment Identification Number [Norway specific info, in Norwegian] by GS1's check digit calculator. They have a "company" prefix and shipper reference starting at variable positions and have variable length [ref executive summary]. The last digit is a check sum.

These are some of my GSIN tracking numbers:

I have not been able to identify what prefixes PostNord uses, if large e-commerce companies like Komplett have their own prefix or what prefix Posten Norge have. I still believe the tracking number are largely auto increments.

27th of May - Update regarding time frame:

After a bit of searching on Google for keywords in the JSON output of the service, I was able to find two paste bins from 2013 and 2014. Both outputs had tracking information plus name and full address. They did not have e-mail and phone number. Both were packages from Komplett.no.

The URL was present in the one from 2013. It is still active on tollpost.no and I could check my on tracking numbers there:

The tollpost.no domain redirects to postnord.no, but not for this service. Tollpost Global AS was accuired by PostNord AB some years back. Testing the same thing on postnord.no, the same API service returned

I think it's fair to say that the service has been online for above 5 years. 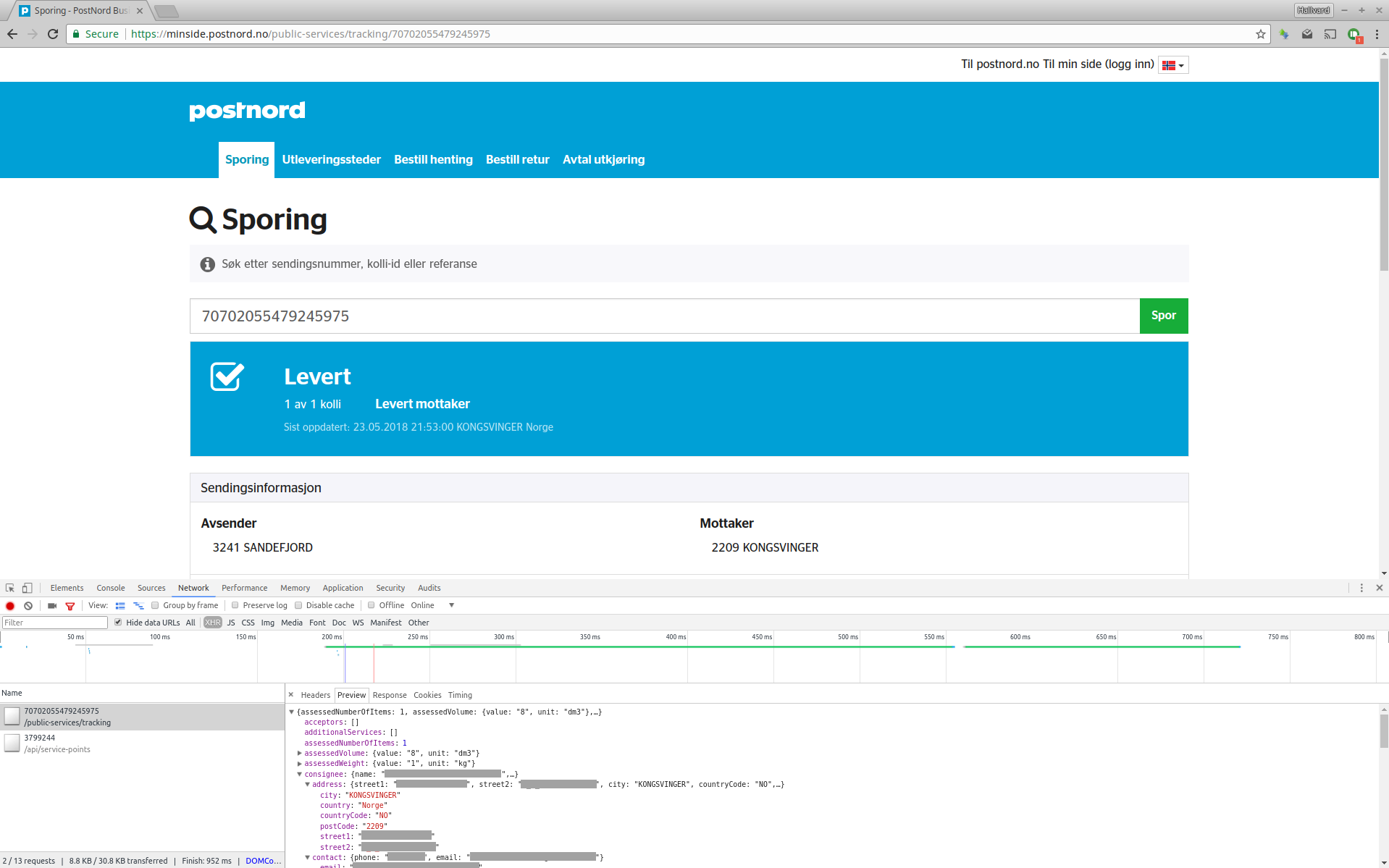 The combination is a leak of estimated millions of customers name, full address, phone number and e-mail address.

The solution with guessable tracking numbers have both advantages and disadvantages. A number with a checksum is easier to write than something in the length and complexity of UUID. The guessable/predictable part of the number (autoincrement + checksum) makes it insecure. Everybody can find valid numbers.

Given that they don't switch to something more secure, they can't give out personal data based on this tracking number. PostNord seems to be aware of this, as they have texts like "Due to security reasons we cannot show the recipient's full name and address. This is the postal code and city to where we will deliver the parcel." on another tracking solution they provide.

The handling was fast, so I'll give the numbers in hours instead of days. Komplett did exactly what they should when notified. They gave a preliminary reply within a short time frame and responding in more detail the morning after. The issue was fixed faster than I expected. The reception was also good as it seemed that they were happy to get the notification.

I did not think I had found good addresses to contact in PostNord, but I had a better feeling about addresses in Komplett. Smaller company, usually responsive to customers. I also asked the Komplett Chat for an address to notify about security issues. They had none. I did manage to find the name of and get the e-mail confirmed for the security chief, but the e-mail bounced.

Neither PostNord or Komplett had security.txt on the domains I looked at.

Komplett thanks for the notification and confirmed that the message was received. This is a good sign that the message was sharp enough that people read it in the evening and sent to the right people. Really important to answer quickly, like Komplett did, if you get a message about security issues. Often the problem is that nobody answers.

GDPR is launch in Europe on this day (25th of May 2018). Not active in Norway until 1st of July, but active for all EU citizens in our databases. A lot of privacy policies have already been updated i Norway. Happy GDPR Day!

Phone call from Komplett again. Again thanking me for the notification. I was told that the issue is fixed. I quickly verify it after the conversation.

Just a few minutes later, the Data Protection Officer from Komplett confirms the mandatory incident report to The Norwegian Data Protection Authority was sent. In Norway any unauthorized disclosure of personal data (e.g. data leak or client report sent to the wrong address) must be reported. The reports will be public (a few details might be withheld).

This is quite a large number of affected customers with their name, e-mail, phone number and full address neatly displayed along with their last parcel delivery. The leak is bad.

PostNord know about the issue of displaying names and other information based on tracking number.